I WAS SO AFRAID

Last August, Joseph Malis and his village came under attack during the ongoing conflict in South Sudan. After the killings, Joseph knew the time had come to save his family. That same day, he piled fifty members of his extended family (including baby Flora, pictured) into a truck and headed south for the Ugandan border.

There was little time to gather belongings, and what they did have they lost on the way. When they eventually arrived in Bidi Bidi refugee camp, 40km inside Uganda, they had nothing. Now they have a simple home, a plot of land to grow food, and most important of all, safety.

“In Gimono all the houses were burned down by government soldiers. Even the food in the houses was burned. They just came and started shooting. They killed three people. I was so afraid.”

Joseph and his family had escaped one of the most war-ravaged, desperate places on earth. South Sudan  is the world’s youngest nation, having won independence only six years ago, yet it is a deeply militarised state riven by deadly political infighting.

In July 2016 violence flared yet again in the capital, Juba, shattering a fragile peace accord, and quickly spread to surrounding areas. Rival militias have been roaming the countryside, terrorising the population and killing indiscriminately. Survivors attest to mass atrocities.

There are currently 1.83 million South Sudanese who, like Joseph and his family, have fled for their lives. “I don’t know when we’ll be able to go back to South Sudan,” reflects Joseph, holding his daughter tightly. 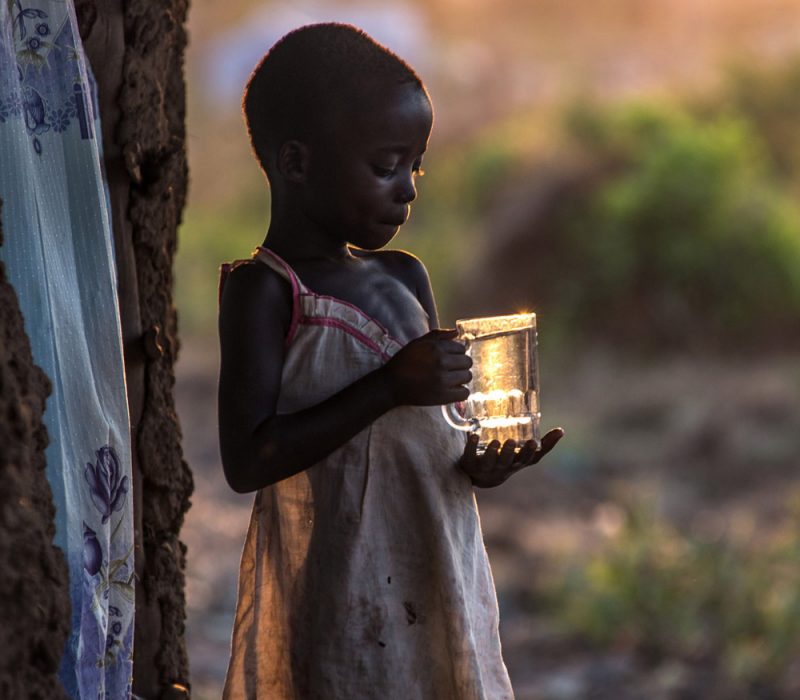 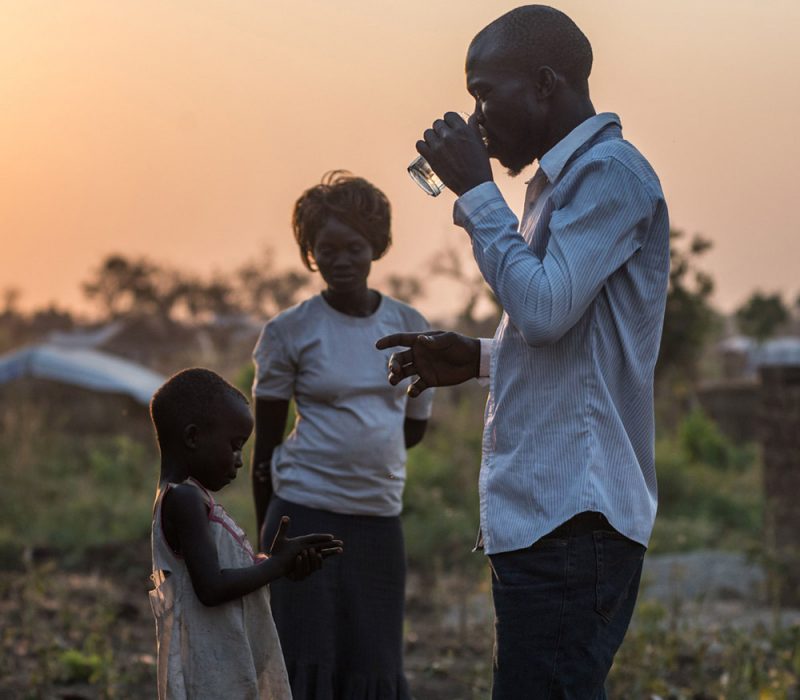 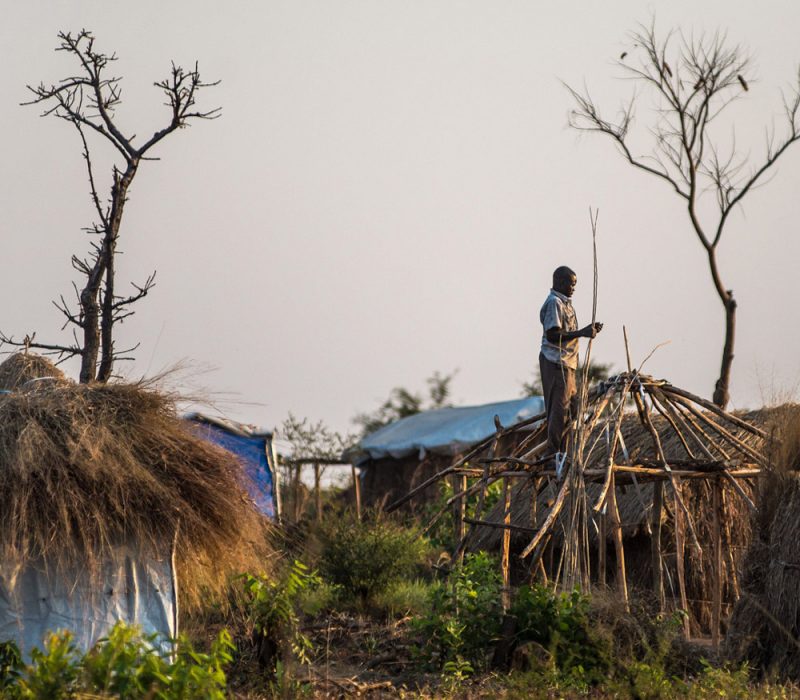 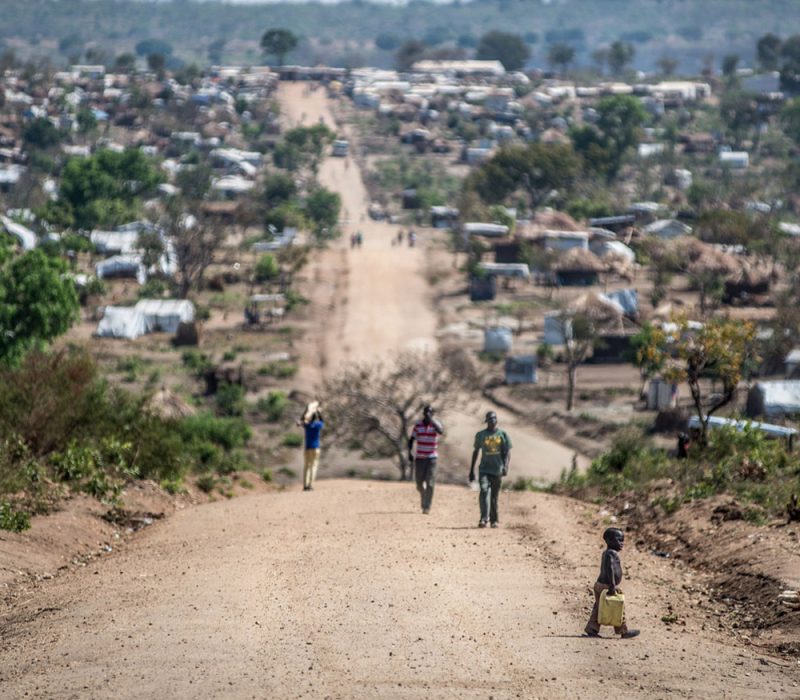 Seven months ago, Bidi Bidi was a quiet village in the grasslands of northern Uganda. Now, with a population of over 272,000 for Bidi bidi alone, it is the second biggest refugee camp in the world.

Caritas Uganda and other aid agencies have had to spring into action virtually overnight alongside the Ugandan government to care for the needs of this sudden huge influx of people. Caritas emergency teams were mobilised in record time.

“It was the most effective response in my 22 years at Caritas,”  said Msgr Francis Ndamira, national director of Caritas Uganda. “Things have never moved so quickly.”

Within days of arriving at Bidi Bidi last October, Caritas teams had distributed 10,000 hand tools for farming and 10,000 tonnes of vegetable seeds. Help is currently reaching 3,600 refugee households, around 12,600 people, within the Caritas zone of the camp, and the agency would like to support many more.

The fast response was, and is, essential. Refugees are still arriving non-stop at the border – currently over 1,500 a day, mostly on foot, tired and hungry, carrying children and sad bundles with a few household goods.

A sobering tally being kept by UN personnel shows the total number of people crossing into Uganda each day: Tuesday 1st November, 5892; Wednesday 2 November, 4485. All fear for their lives, all have been forced to leave behind homes, crops, possessions. Many of the women and girls report having suffered sexual assault on the way. Too many have witnessed the death of family members and friends.

“It’s much too dangerous to go home,” says Viola Tabo. She was at home in South Sudan’s Loka village, in Lanya County, when soldiers arrived last September. She will never forget what happened next.

Aged just 22, Viola took her five-year-old son Charles and made for the Ugandan border. She found her way to Bidi Bidi, and refuge. Her brave decision saved their lives. This January, eight more of her family were killed back in South Sudan. 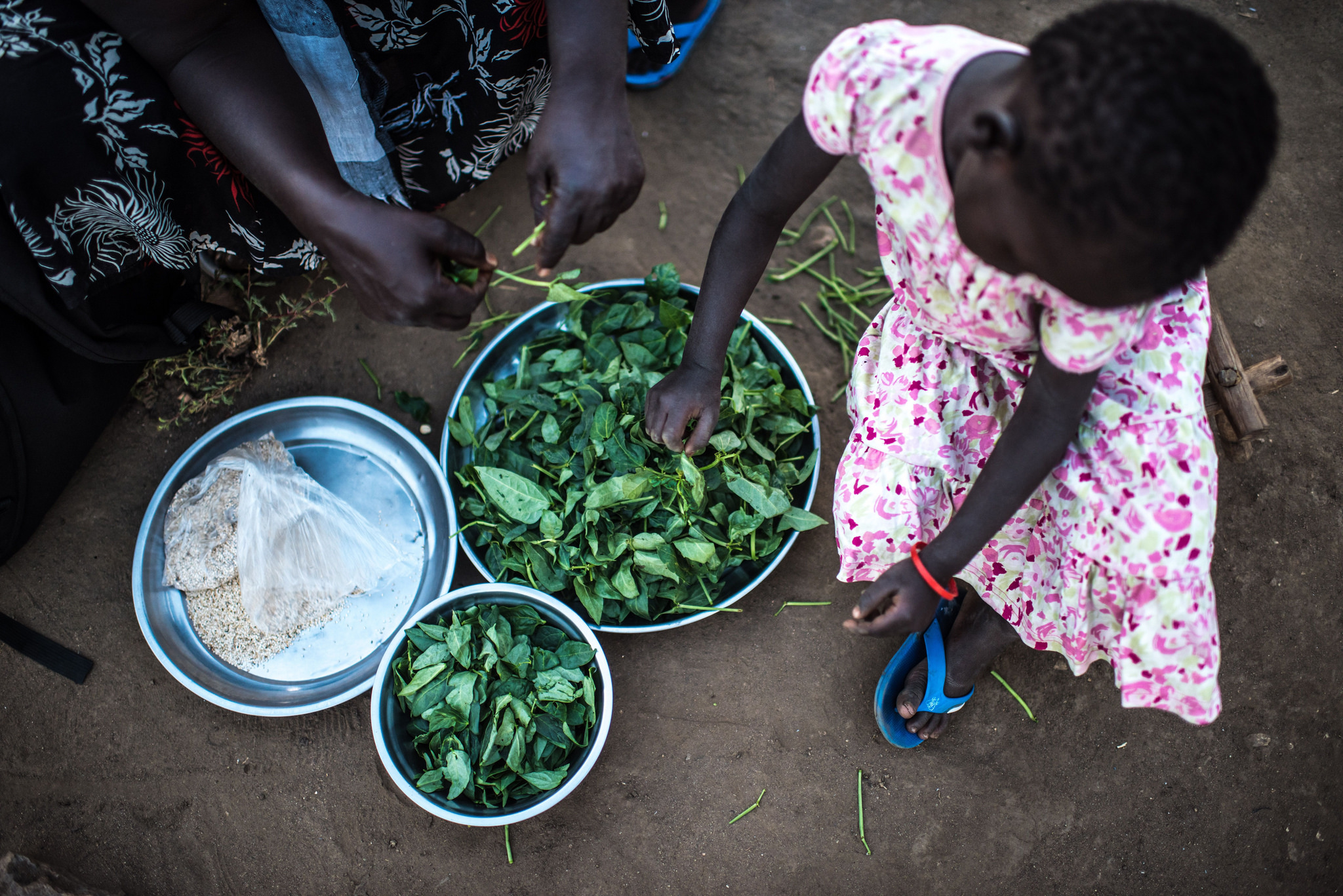 “It’s even worse than it was before,” says Viola. Her new country imploded into civil war in 2013. There is no end in sight to the suffering of its civilians.

Viola is growing accustomed to her new life in the camp, as things become gradually more organised. “At first there was little food here,” she remembers. “Life was very hard. But now we are getting some good supplies.” 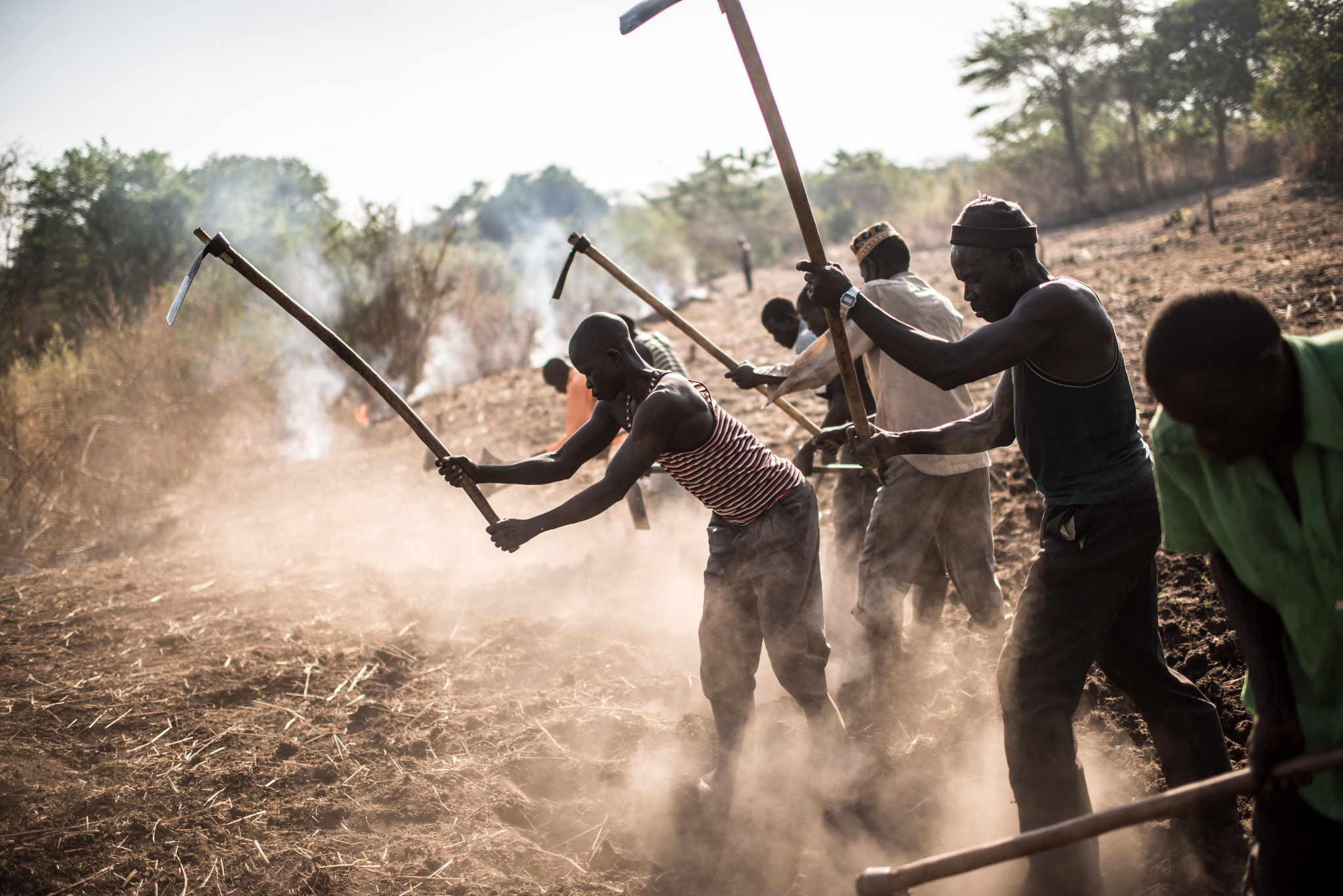 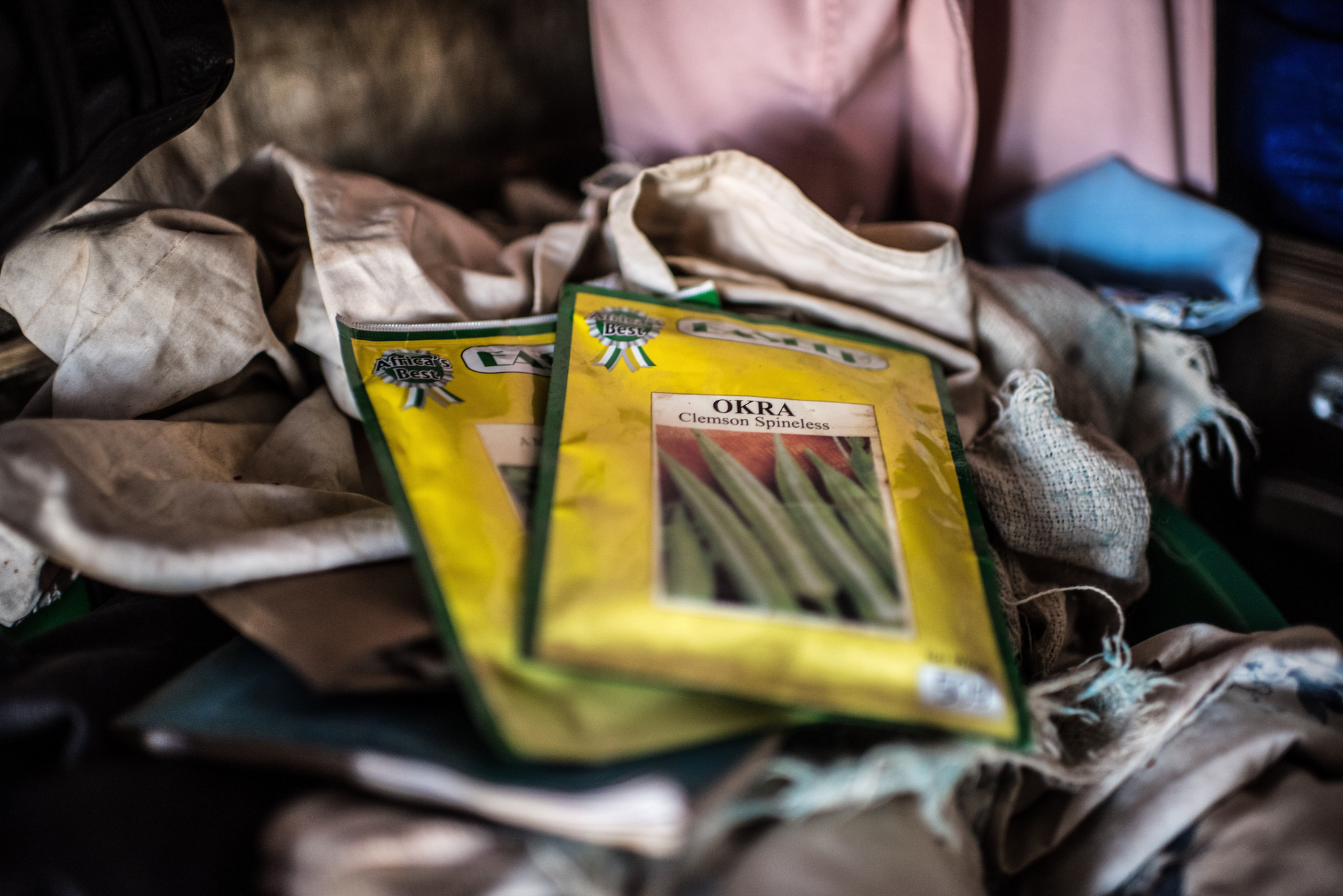 “Three of my brothers were beheaded by government soldiers. The soldiers intercepted them coming home to the village. We heard some gun shots and then screaming. We ran away to the bush, and we only found out later what had happened.”

Like Viola, Joseph Malis describes how rapidly life has improved at Bidi Bidi camp since he first arrived. At first they received the most basic supplies, just some maize, beans and oil. He had a family to feed, and was concerned for their diet.

But since Caritas took over running his area of the camp, he is being given seeds to grow okra, amaranth and cow-peas. The family have already picked their first nutritious vegetables.

“We needed a change in our diet,” he explains. “When the rest are ready for harvest, we will have enough to save some and sell it.”  He plans to add tomatoes to his patch when the season is right, to boost the vitamin intake of his one-year-old daughter Flora. “We are surviving,” Joseph says, but the long-term future for his family is uncertain. 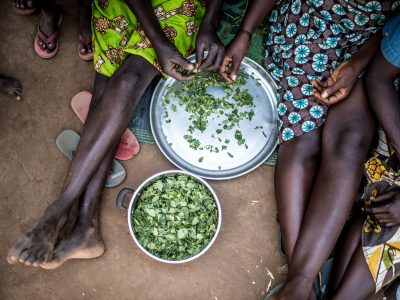 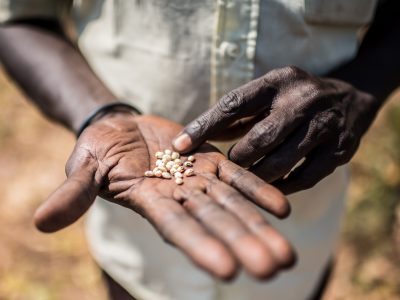 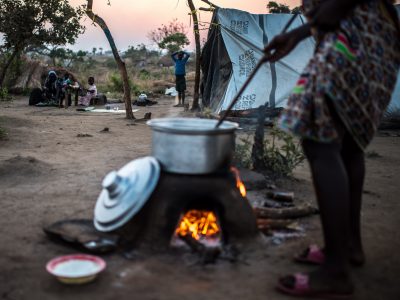 Since the camp has long since overflowed, exceeding even the worst-case scenario forecasts, aid agencies and the Ugandan government have been racing to keep up with the pressure and malnutrition is still a serious problem especially for children under five. Currently all of the refugee families are in dire need of food assistance, most are eating only one meal a day. Much more support is needed, and will be for a long time ahead, hence the current appeal among Caritas members and the general public to scale up the number of people who can be reached.

David, who is 26, came to Bidi Bidi last August. Back home in Yei, South Sudan, he had just qualified as a teacher, when he was forced to escape from soldiers on a shooting  spree who killed his friends. “I didn’t want to leave. I had just graduated from university so I wanted to stay and build something.”

“We are all farmers. It’s in our blood!” laughs David Songa, a refugee himself who is now a Caritas worker in Bidi Bidi, helping farmers. “We believe that what we eat should be grown in our fields.”

There was already little food security for local Ugandans before the refugees arrived, now the pressure on farmland and food supplies is intense. Drought and unreliable rainfall add to the difficulty. Around 60% of the host community is also suffering food insecurity. So Caritas is also supporting 900 Ugandan families alongside the refugees, not only with seeds and tools to kick-start the new season’s harvest but with training courses in good farming practice. 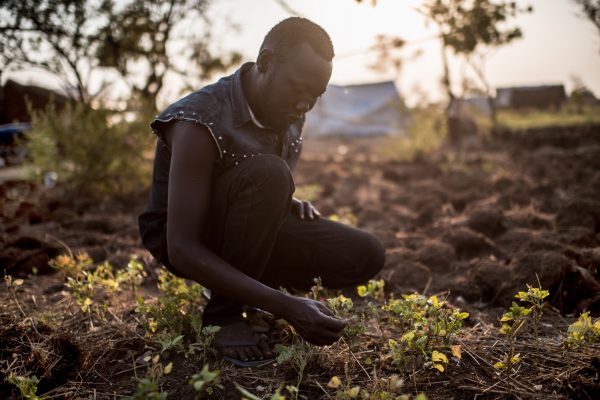 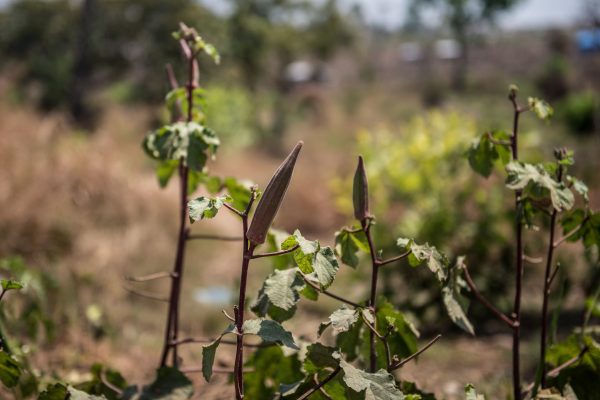 At least he is teaching now, even though the circumstances aren’t exactly what he had in mind. “My job is to link Caritas to the farmers. I work with ten groups of 30-40 farmers.” He has been trained by Caritas in modern agricultural techniques:

“They taught us a lot about farming as a business, both kitchen gardening and field production. We came to see we just weren’t doing things the right way before. I teach them about climate-smart farming and about different plant varieties and how to look after them. And I discourage deforestation.”

David feels very encouraged by the positive response from farmers. “Some of the farmers come out of the training like different people. Everyone is now eager to see what will happen.”

Caritas agencies from Europe and Japan are joining together to support Caritas Uganda in this urgent humanitarian challenge and plan to spend 405,000 euros in the coming year. We hope, along with David, that the new season’s harvest will be a good one, bringing both food and hope to the troubled inhabitants of Bidi Bidi. 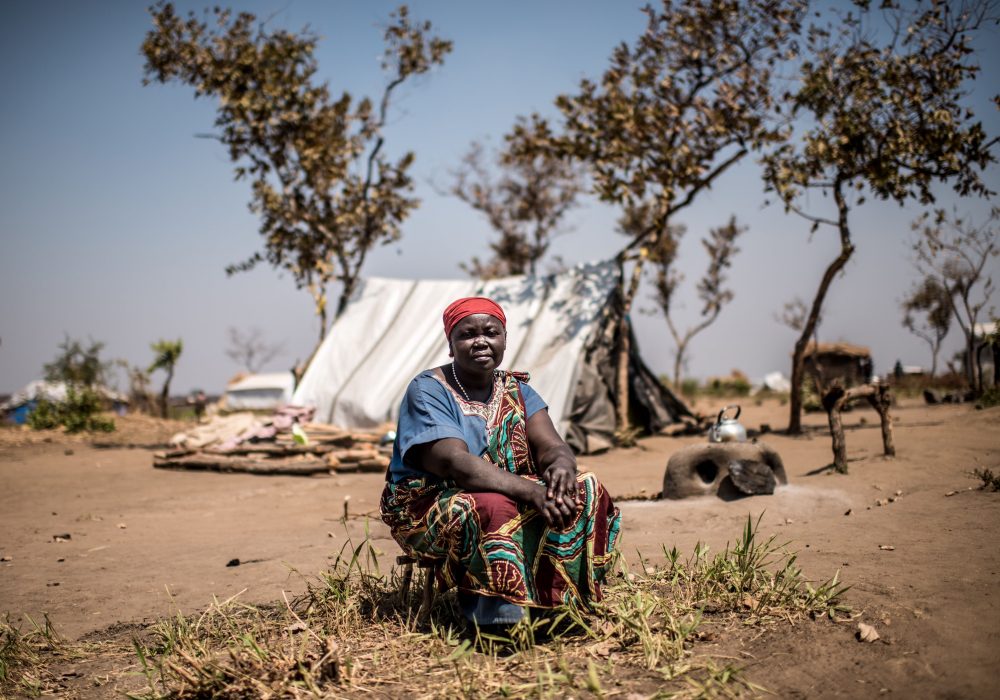 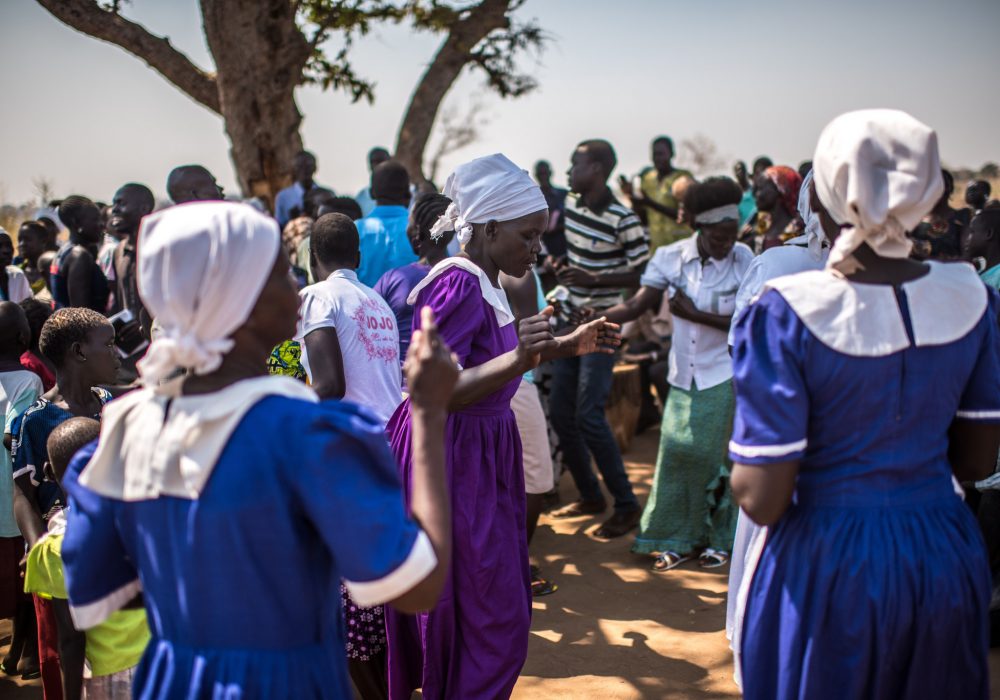 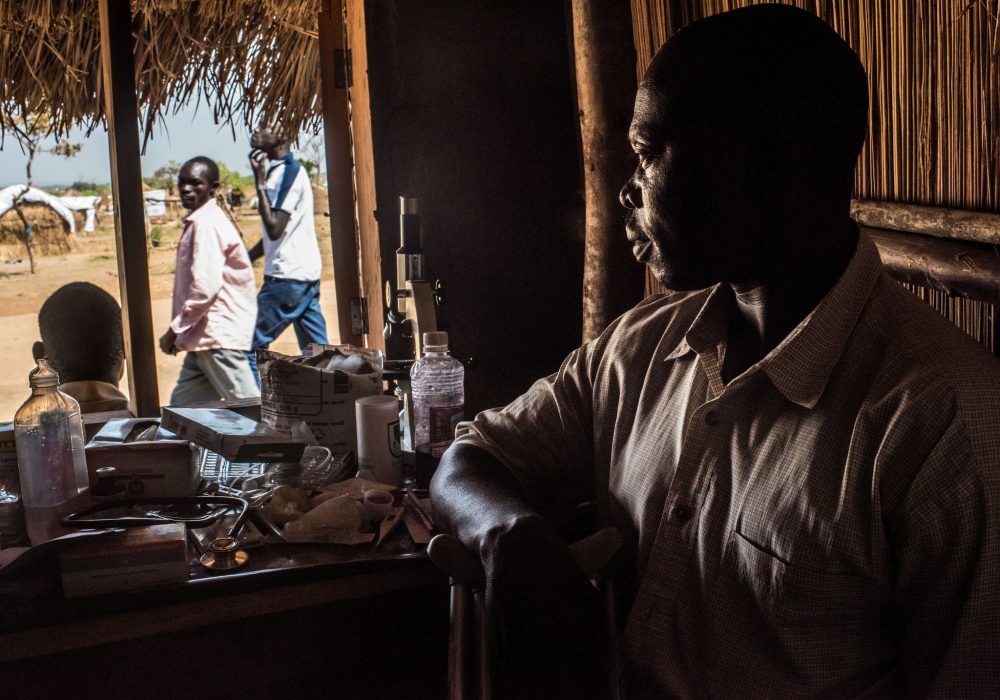 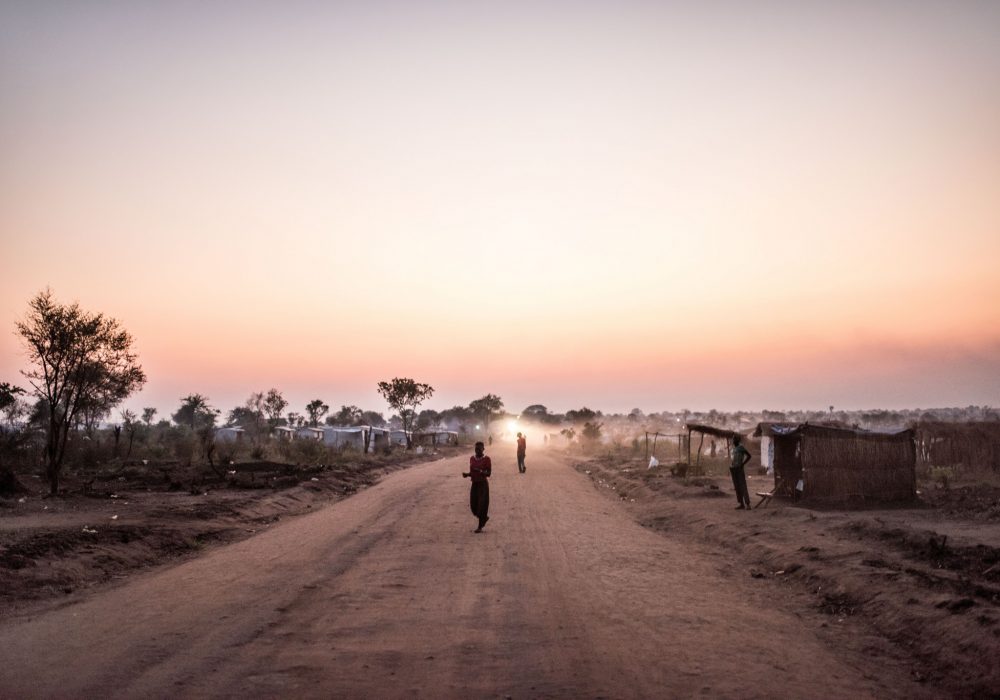 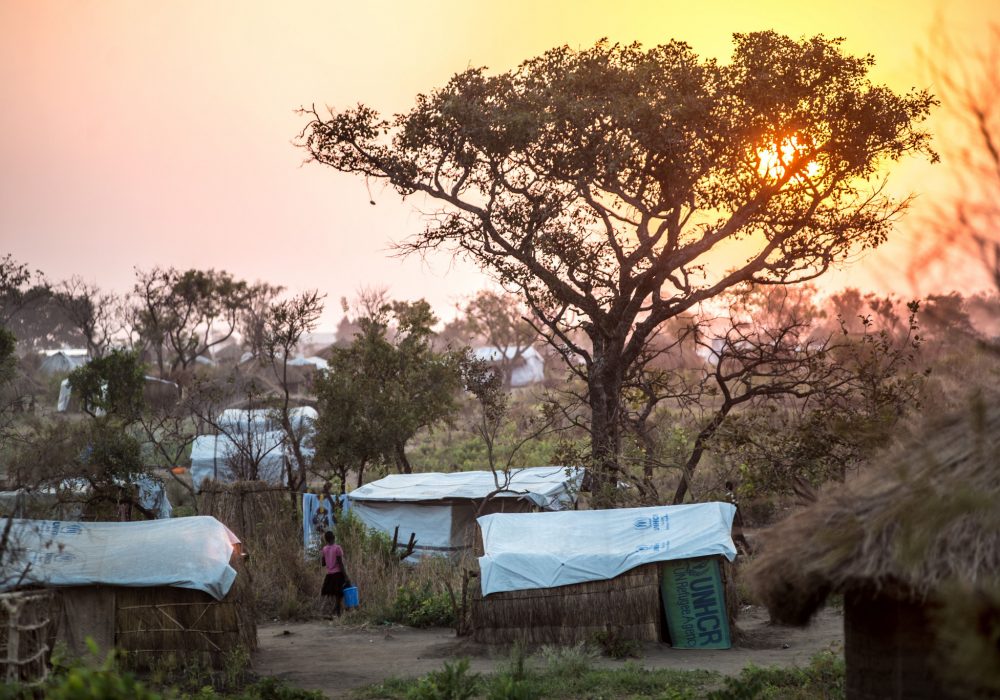 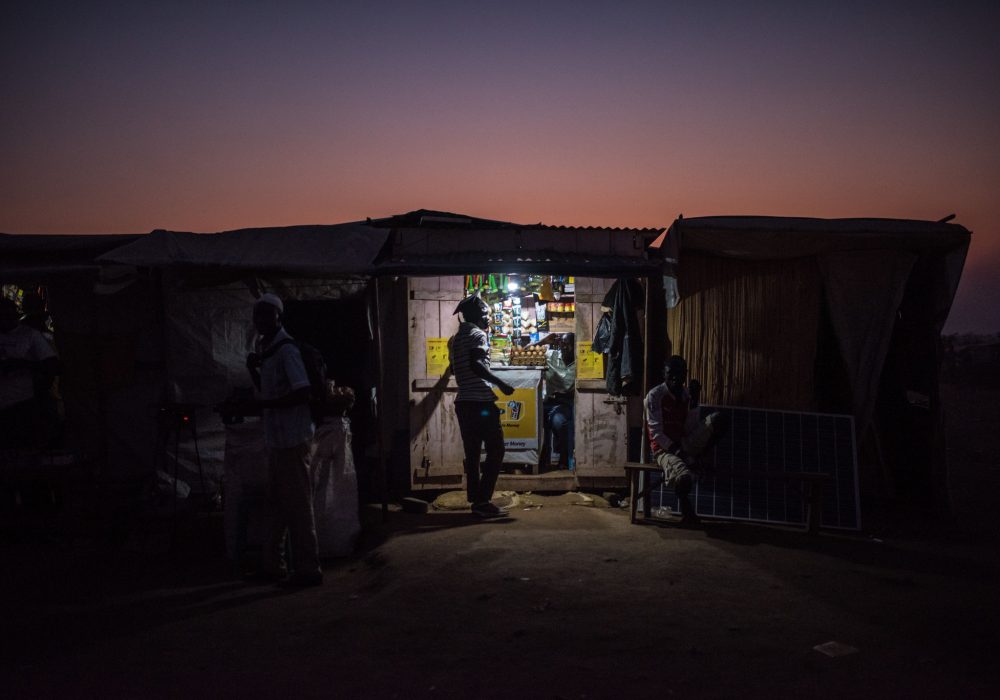